Hospitality in Greece stretches back thousands of years to ancient Greek times. Xenia / Philoxenia (meaning “guest-friendship”) is the ancient Greek concept of hospitality, the generosity, and courtesy shown to those who are far from home and need a place to rest. For modern Greeks, it is much deeper than that. It is an unspoken cultural law that shows generosity and courtesy to strangers. Greeks are enormously generous when inviting others, or being invited themselves, no matter where they live.

Philoxenia can be as simple as a smile, helping a stranded traveler, buying a meal for a homeless person, or opening your home to strangers, friends, and family. There are countless articles and stories describing the hospitality of Greek people, in Greece and outside Greece.

There’s a wish for every occasion in Greece — maybe not for clearing up after a wedding though.

Greeks have a wish for every occasion, so much so that foreigners can often be lost in the labyrinth of etiquette.

Where “congratulations” will suffice for almost everything in English, we will distinguish between the newly wed (“may you live long” — “na zisete”), the newly employed (“good progress” — “kali proödo”) and the newly pregnant (“good liberation” — “kali lefteria”).

We wish people happy Christmas, New Year, Epiphany, Lent, Easter, week, month, weekend, winter, summer, on their birthday and of course on their name day — calendars remind us when to phone Stavros, Vasso or Stelios to wish them well.

We have wishes for a new house “kaloriziko” — “with good roots”), for taking exams (“kali epitychia” — “good success”), for the best man in a wedding (“axios” — “worthy”) and for every singleton in view (“kai sta dika sou” — “to yours [i.e., wedding] too”) but to top it all, we also wish well to the dear departed during their funeral (“kalo paradeiso” — “good heaven”).

So, non-Greeks: to be on the safe side, best repeat what the last person just said.

Despite being famous for a sailor who lost his bearings for 10 years — Homer and his legendary “Odyssey” — Greece is the biggest ship-owning nation in the world with a total asset value well above $100 billion.

Meanwhile, Piraeus, near Athens, is the biggest passenger port in the Mediterranean with an annual average of 7.1 million passengers.

There are no fewer than 227 inhabited islands dotting the Aegean and Ionian seas, so it’s no surprise that we took up sailing or that island-hopping is one of Greece’s great pleasures.

In normal times, a sailing vacation is a great way to explore Greece’s archipelagos, particularly if you’re tired of staying in one place and you’d rather swim in solitary coves rather than lie on sunbed-strewn beaches.

And should you want to plunge in and learn how to skipper a boat, there are courses aplenty to choose from, with instruction in some of the most attractive settings in the world. 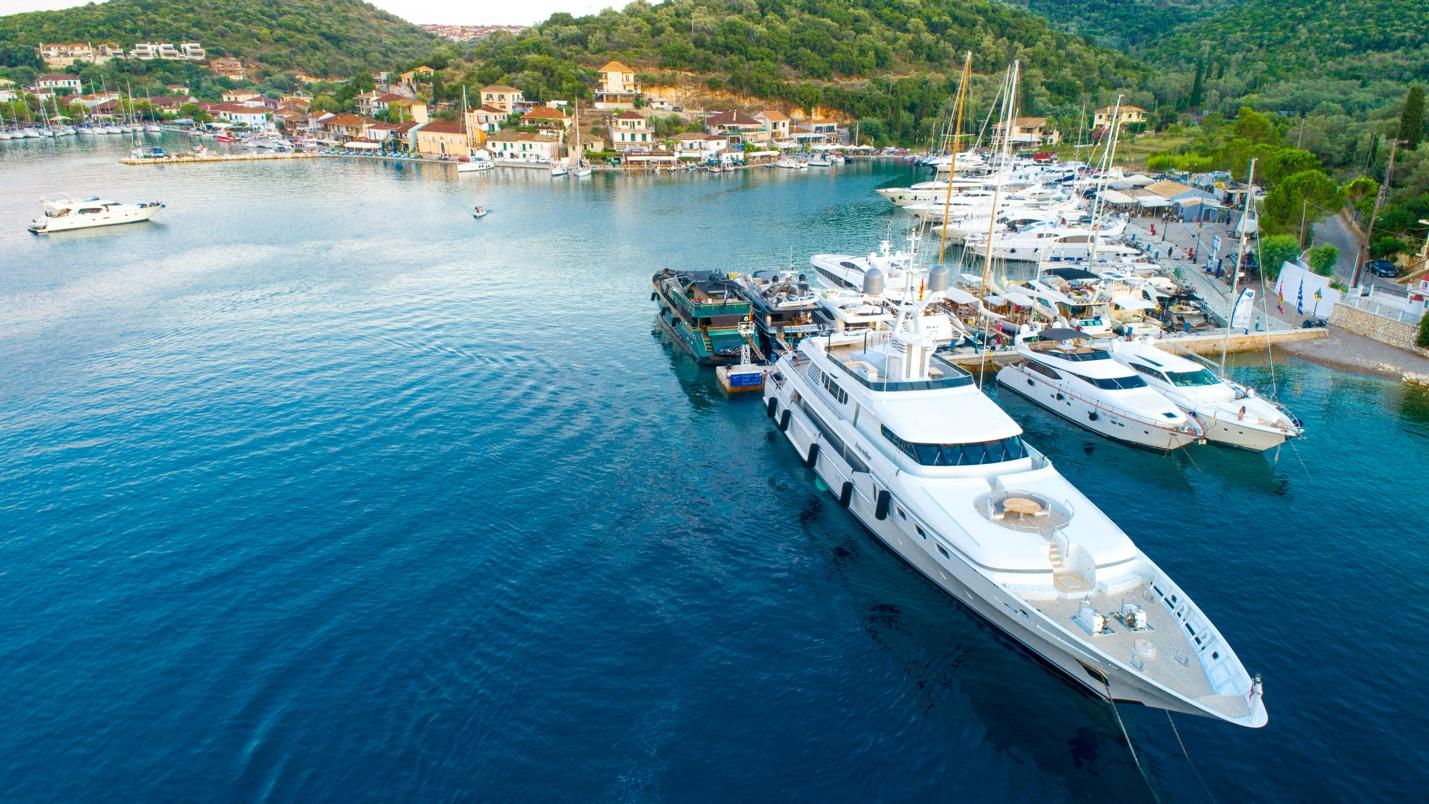 Maybe the first thing you’ll notice upon arrival in Greece is the raised tone of voice adopted by everyone.

In some countries, they gesticulate to draw attention. In others, they move words around for emphasis (“To your mother you speak like that?”).

In Greece we yell.

Non-Greek speakers can be forgiven for assuming that two passersby are on the brink of coming to blows when in reality they’re probably both simply complaining about the buses.

Some speculate it’s the nation’s seafaring past that’s responsible, when sailors had to shout to be heard above the waves. Others point at the mountainous terrain where shepherds had to communicate over ravines.

Modern thinkers blame machismo and toxic masculinity, without explaining why women more than match the men in the decibel count.

My personal theory is that shouting is the safety valve of a people who’ve been invaded and vanquished and had to bow in frustration to foreign overlords again and again. 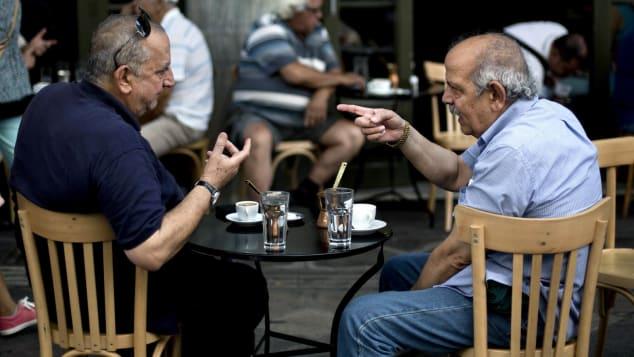 Forget moussaka, yoghurt or tzatziki: our most significant contribution to international cuisine has been frappé — a cold coffee served with ice cubes, the perfect accompaniment to a long rest in a deckchair.

No special machinery is required, for it’s a triumph of simplicity over technology.

A spoonful of instant coffee in a tall glass is mashed up with enough water to make a paste; it’s then topped up fully with cold water and shaken like a cocktail — voilà.

Legend has it that it was concocted by an unnamed barista in the early 1960s during the Thessaloniki Trade Fair when a power cut made it impossible to brew coffee.

Hail that unsung genius who exemplifies the inventive improvisation so typical of his compatriots.

GOING ON AND ON ABOUR OUR PAST

As schoolchildren we learn our very long history in three yearly instalments: firstly, Classical history that quickly stops once the Romans enter the scene; then Byzantium; and finally, Modern Greece (with half the syllabus being the 1821-1829 War of Independence).

Then, just in case we weren’t paying attention the first-time round, we learn it all over again for another three years.

As a result, we’re very aware that our past has been far more glorious than our present, so we’ll never stop reminding you that while our ancestors were inventing democracy and calculating π, the rest of Europe was worshiping trees.

Always, always agree: Yes, of course, “the West” owes everything to the Greeks — even though adherence to Aristotle’s teachings stifled scientific thought for centuries — and yes, of course, the Greeks first thought of the atom, the computer and the steam engine (all true).

But if we start claiming the discovery of Canada and interplanetary travel, you might want to change the subject.

Our obsessive concern with health is only marred by a blind spot as regards smoking, for 37% of us puff cigarettes, the highest percentage in the European Union.

Although a law banning smoking in enclosed places has existed since 2010, it only started being enforced in 2019 after delays caused by the country’s recent financial crisis.

Still, as everyone eats al fresco, the regulations did not apply.

Militant anti-smokers will appreciate the island of Astypalaia. The local council has, perhaps somewhat optimistically, declared it smoke-free.

Much of our Christmas folklore is imported (tree, presents, turkey) so it’s to Easter Week we look for a slew of customs and traditions.

Each day has its own meaning with specific fasting dishes and a special hours-long Orthodox Mass that’s been unchanged in centuries.

In normal years, when the coronavirus hasn’t grounded us, it climaxes on Good Friday when every church has a procession of its own garlanded Christ’s Tomb through the parish streets; we mutely follow behind.

Saturday sees us all standing outside a church at midnight waiting for the bells to ring, for the fireworks to go off and for the familiar melody of “Christ is Risen” to be sung. And this goes on for the next 40 days in case someone missed the good news.

At home, a traditional offal soup (“mageiritsa”) awaits us — it tastes much better than it sounds — while the smell of roast lamb wafts in the air from makeshift garden spits all over the country on Easter Sunday.

Other countries have Christmas markets, New Year’s fireworks or Carnival celebrations, but nobody does Easter like us Greeks

Zeus, ruler of all the gods, was the protector of hospitality (filoxenia) and vestiges of that innate concern about a guest’s well-being are still alive among the many family hotels scattered around Greece.

One of the secrets behind the explosive success of the tourism industry surely lies in the warm welcome visitors find in every corner of our country.

First-timers are shocked to find that the homemade dessert (to kerasma) at the end of their restaurant dinner is free, or that the digestif — usually mastiha liqueur — that accompanies their check is on the house.

They also discover that the long heart-to-hearts with the hotel matriarch are chats of genuine human concern rather than pointless gossip: the receptionist, the cleaner, the waiter, the cook really do want to know you better.

According to the Hellenic Quality Assurance Agency on Higher Education more than 38,000 Greeks studied in foreign universities in 2017. When it comes to overseas students in proportion to our population, we’re the seventh highest country in the world.

And our students do well: whether at Cambridge, Stanford or MIT, they often seem to be top of the class.

Greek families traditionally strive for a better future for their children and, it appears, our sons and daughters feel obliged to succeed in return.

Plus, a degree from a good foreign university has become a way of getting a job in recent economic hard times, given that the percentage of our unemployed graduates reached 20% in 2018.

For a nation without kosher or halal restrictions — or maybe because of the long interaction with such neighboring cultures — we Greeks are incredibly picky.

We typically snub supermarkets and buy fresh fruit and vegetables in one of the thousands of farmers’ markets that pop up on the streets of every village and town — even in the capital.

Restaurant menus mark with an asterisk meat and fish dishes whose ingredients have been deep-frozen and not bought fresh from the local butcher or fishmonger.

Greece has been through many crises in its history and when the current one is over, the foodie scene will be the first to bounce back immediately — of this, I’m sure.