17 of the Prettiest Villages in Greece

Villages are often overlooked by sun seekers heading to the best Greek island beaches. But beyond the inky sea and black-sand coves, there are lovely spots to be found all over the isles – whitewashed hamlets that lead to hilltop churches with their classic blue domes, pastel harbors inspired by the Italians and crumbling neighborhoods where life centers around lazy cafés and shaded squares. This is our pick of some of the most beautiful towns in Greece to seek out on your next visit.

Halki is the smallest inhabited Dodecanese island and Nimporio is its harbor and only village – best known for its rainbow-hued houses, which line the seafront. It’s about a mile and a half away from the old capital Horio, where 15th-century ruins still stand, and the fortress has a brilliant view all the way to the Carpathian Sea. 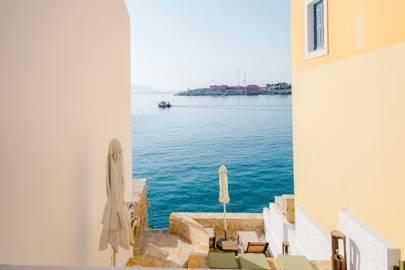 The capital of Naxos, Chora buzzes all year round. Classic white-washed Cycladic houses rise across the little hill the port was built on and peek over the sea. The most famous sight here is Portara, a huge doorway to the ancient temple of Apollo, which was built

around 522 BC but never finished. Legend has it if you stand at the doorway and make a wish, you can harness the god’s energy and make your wish come true. 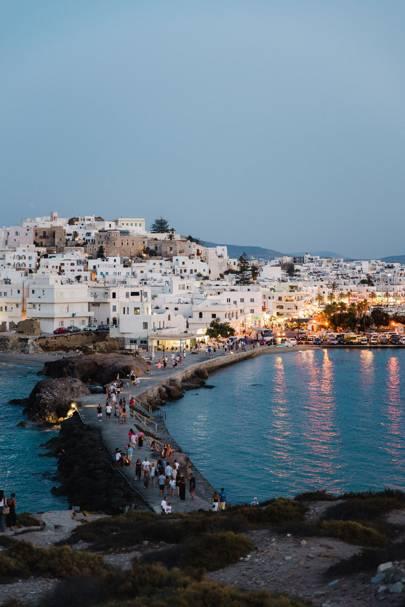 One of the largest natural harbours in the Aegean Sea and the main port of Amorgos, Katapola is built around a sandy beach in the middle of the bay. The whitewashed basilica sits between the pretty village houses, while the ruins of a 13th-century Venetian castle dominate the landscape. There are also remains of an ancient Minoan settlement, reached by a walking trail from the village, which have some of the best views of the island. 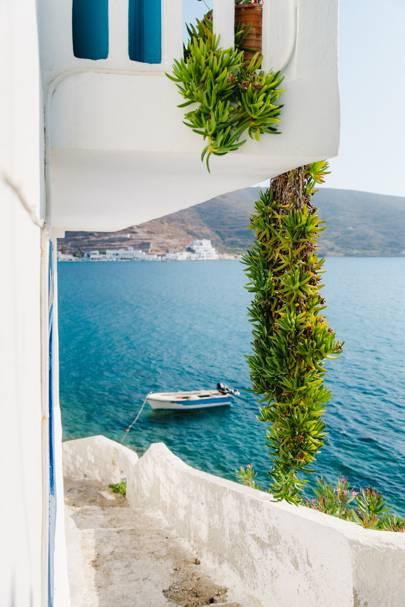 The tiny Cycladic isle of Iraklia pokes out of the sea between Naxos and Ios. It’s so small, most tourists don’t make it over – and so they miss out on Agios Georgios, the main port and biggest village here. Most of the homes of the 150-strong population face the Aegean, and there are a handful of seafront restaurants and bars, which overlook caster-sugar-fine sand and bobbing boats. 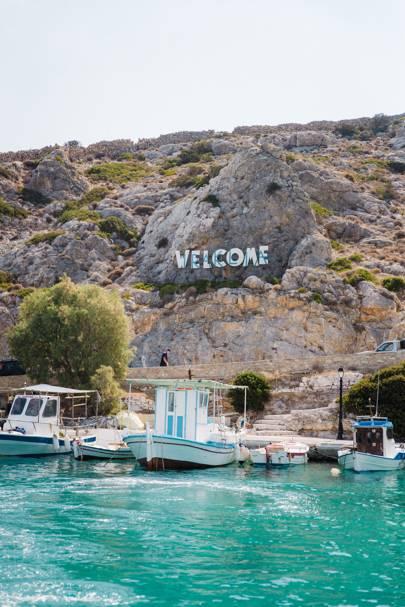 Smaller still than neighboring Agios Georgios, Panagia is a traditional town set at the foot of Papas Hill. For a long time, this village surrounded by farming land was Iraklia’s largest settlement, its distance from the sea offering relative protection from pirates. Stone-built houses still have their traditional baking ovens in the courtyards. 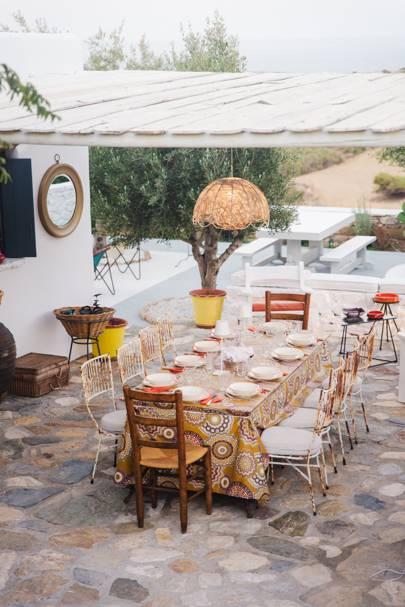 Syros is one of the smaller, sleepier islands in the Cyclades, and Ano Syros lives up to this reputation: it’s much quieter than the towns thrumming with day trippers on nearby Santorini and Mykonos. It was built by the Venetians in the 13th century on a rocky hill, and the narrow cobblestone streets mean it can only be explored on foot. 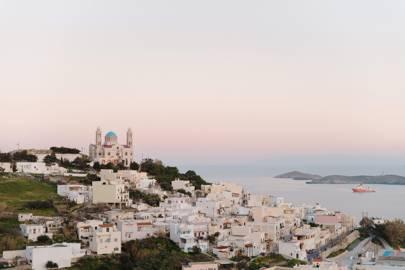 Life in the buzzing hilltop capital of foodie island Sifnos revolves around Steno, a lane that winds through the area. On rooftops and terraces across the cluster of villages, clever bars and interesting restaurants have sprung up, yet at the heart of the action is O Drakakis, an old-school café that’s been drawing locals since the 19th century. 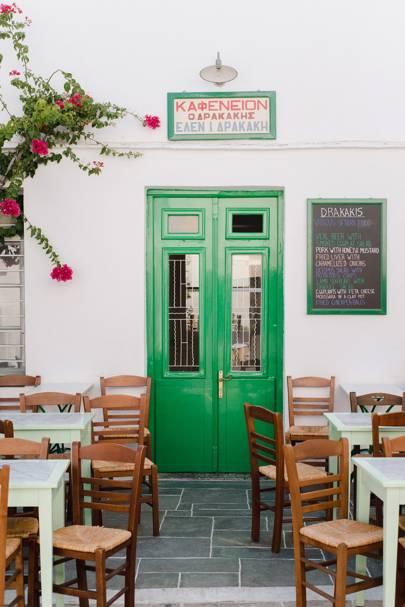 Car-free Kastro sits on a clifftop overlooking Sifnos. Most visitors come for the Church of the Seven Martyrs, which sits on a hill that protrudes over the Aegean, reached by a long, steep path. From here, you can see the nearby islands of Folegandros and Paros rising out of the sea. Back in the main village, there are the ruins of an old citadel and a walking route that stretches along the coast towards the village of Chrysopigi. 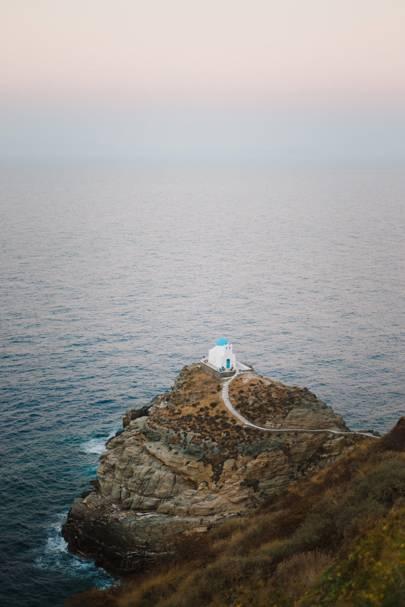 Peeling little Ermoupolis is the capital of the Cyclades. Just like Ano Syros, this town was partly constructed by Venetians, which means it has an Italianate feel: piazzas of marble, grand villas and more dusky-pink buildings jutting into the Aegean than those in classic white and blue. 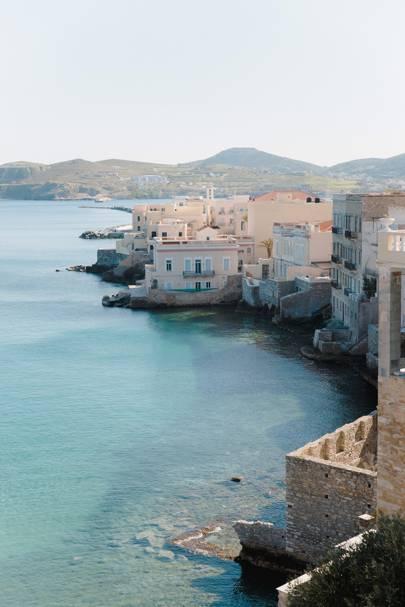 Candy-coloured harbour town Yialos on the little island of Symi is made up of seafront hillside villas in fruit hues. The entire place is a national monument, with 500 steps that spread across the scrubby cliffs to nearby village Chorio. 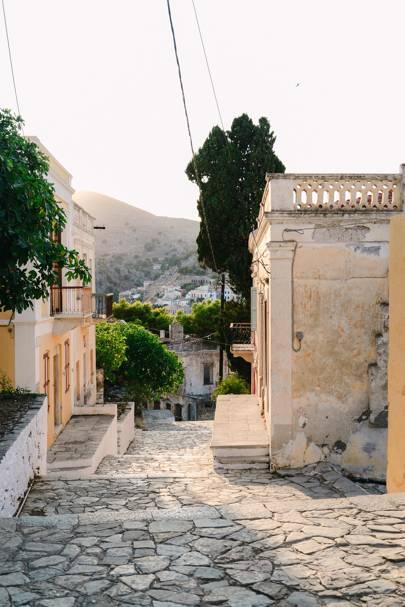 This tiny fishing village is filled with syrmata, houses for fishermen that are carved into the rock face, their brightly coloured doors buffeted by the sea. The ground floors are used to store boats when the Aegean gets rocky, while the upper floors are lived in. 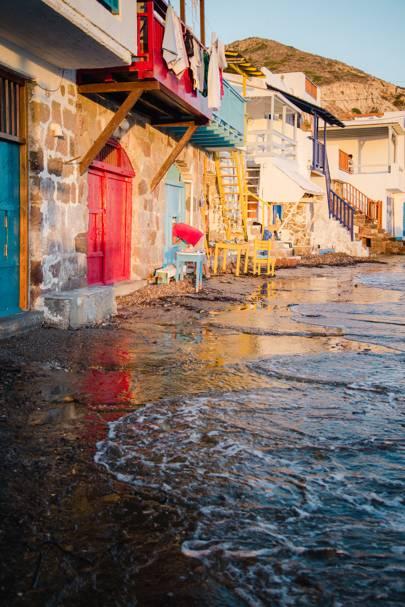 The capital is made up of a maze-like cluster of polished cobbled alleys. Bougainvillaea climbs up the whitewashed stone walls of tavernas and cafés 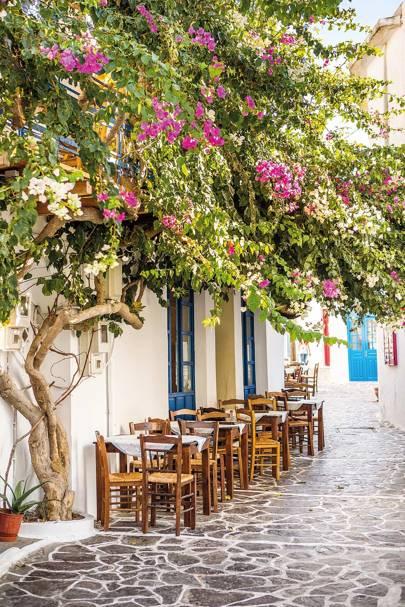 Once a sleepy cove on green Corfu’s north-east coast, Agni Bay is now a smart enclave dominated by a handful of authentic seafront joints such as Nikolas Taverna, which serves Greek coffee in the mornings and roasted mussels and rabbit stew in the evenings. The next village over is Kalami, where Gerald Durrell lived and wrote his books. 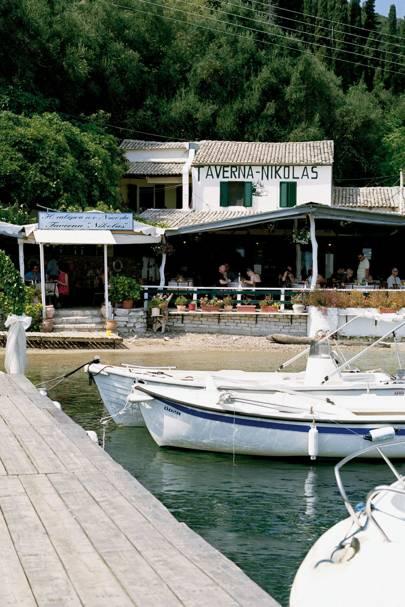 Dinky Kastellorizo island is known by many as the last stop in Europe, just a few miles off the coast of Turkey. Above the harbour, winding steps cling to the cliffs. The only village – the eponymous Kastellorizo – is made up of a pastel swell of houses that rise from the sea. 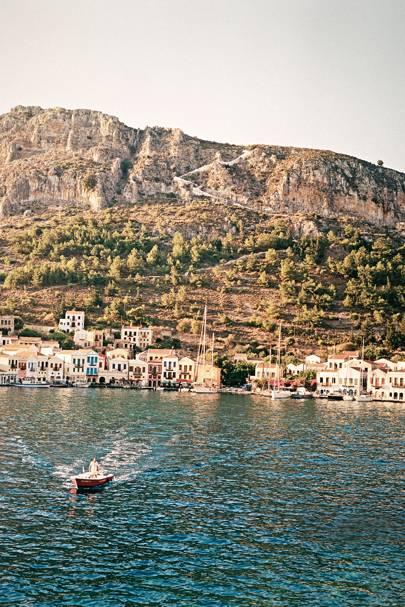 It’s the most classic of all the classic Greek towns. Santorini’s cliff-hugging Oia is the sweetest spot on the island. The white-washed buildings are scattered with blue dome churches, and secret lanes lead off the busy main thoroughfares to uninterrupted views of the sea. Evenings get busy with those seeking Santorini’s famous sunsets – visit early to get the town to yourself. 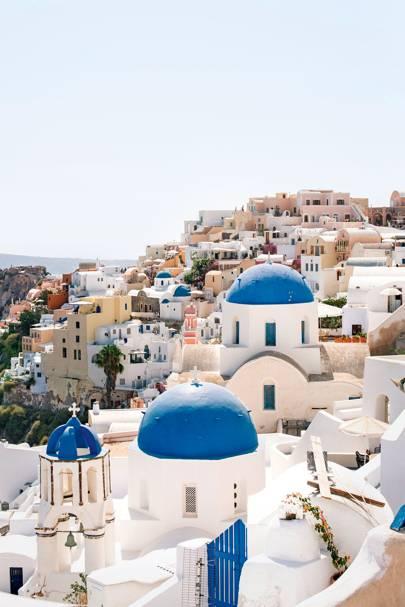 One of Greece’s harder-to-reach islands – there are no direct flights, and the high-speed ferry takes about six hours from Athens – Amorgos is a much slower alternative to the bigger-hitting Cyclades spots. Its main town, Chora, is just lively enough, with a clutch of friendly cafés for courgette croquettes and cocktails. 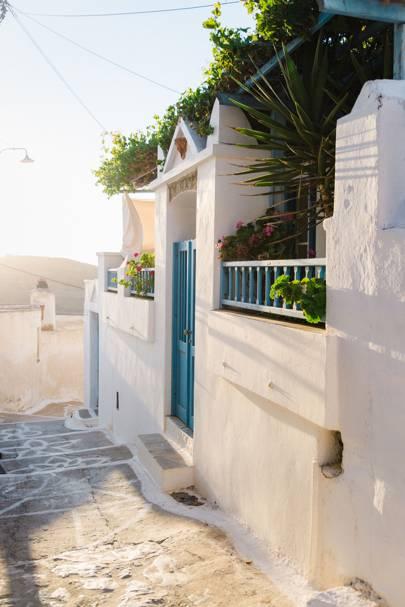 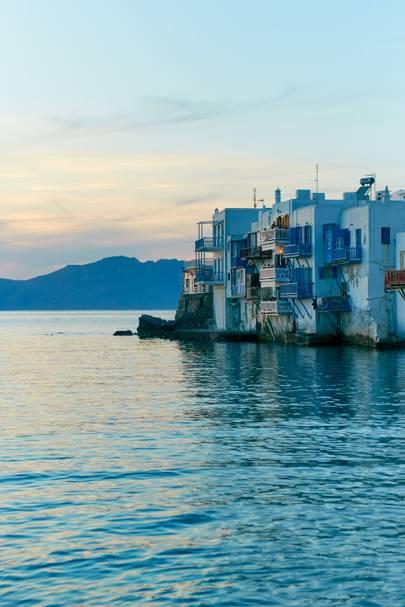